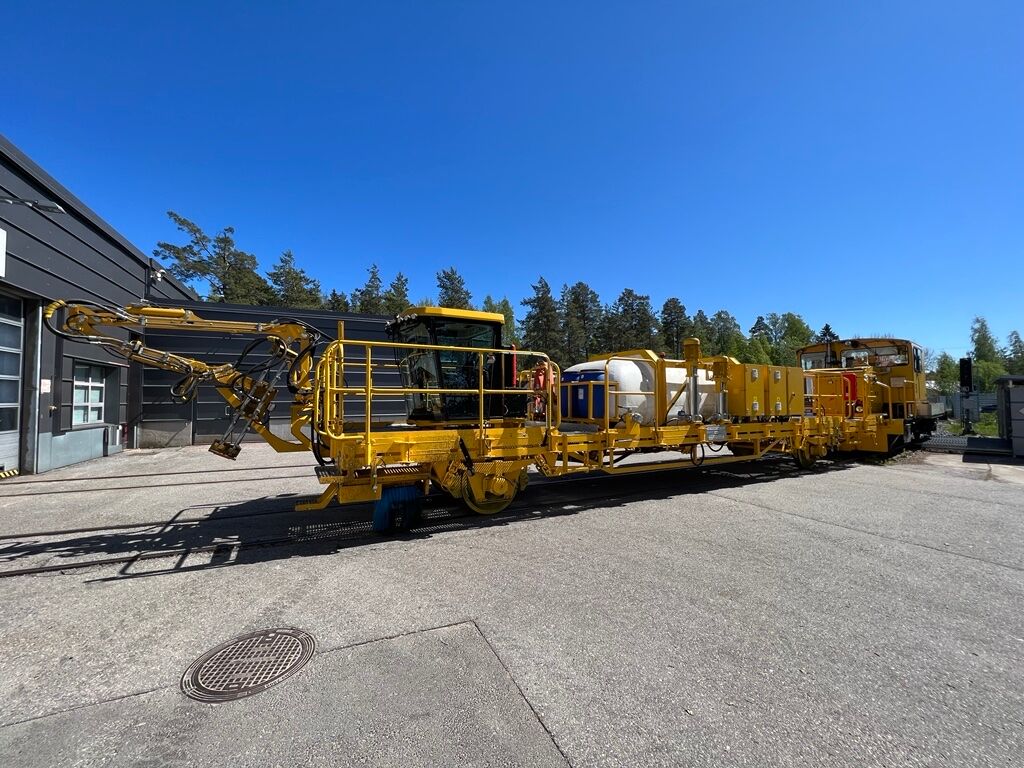 As the number of kilometres in the metro tunnel has increased fourfold, Metropolitan Area Transport Ltd has invested in more efficient maintenance equipment. Sustainability was the starting point for the procurement of the new tunnel cleaning wagon; it is environmentally friendly as it is built on top of a recycled frame and it uses only biodegradable and ecological washing agents. The new tunnel cleaning wagon was supplied to City Transport Ltd by VR FleetCare.

The metro tunnels accumulate dirt and dust which air currents then spread to the station areas. For example, the brakes of metro trains create iron particles that accumulate in the air and on the walls, and the maintenance work carried out at night creates ballast, stone and soot dust.

The accumulation of dust in the wrong places affects the air quality, but can also cause a risk of short circuits due to the presence of technical equipment, such as traffic control equipment, sensors and cameras in metro tunnels. Careful cleaning of the tunnel also improves safety and the durability of the track and equipment.

The tunnel cleaning wagon is used to wash all sections of the metro tunnel. The cleaning wagon can wash all fixed tunnel surfaces, such as walls, fire doors, ceilings, rails, points circuit housings and escape levels.

"The metro tunnels are washed in both directions once a year. The work takes about two months. The new cleaning wagon enables washing as much as two kilometres of tunnel during one night shift," says Procurement Engineer Jaakko Laurila from the City Transport Ltd Maintenance Unit.

VR FleetCare was tasked with designing a tunnel cleaning wagon that combines the circular economy, environmental friendliness, and user ergonomics. Cooperation partners Citec and Suomen Ekopesu were also involved in the design. The cleaning wagon that has now been commissioned is built on top of a 2-axle freight wagon. The construction work was carried out at VR FleetCare's machine shop in Pieksämäki, where other freight wagon manufacturing is also carried out.

"In accordance with the wishes of City Transport, we designed and implemented an environmentally friendly solution for City Transport to clean the metro tunnels and improve the air quality and general operating environment of the platforms. Our production line in Pieksämäki is ideally suited for this kind of small-scale series production of freight wagons and special equipment that use rails,” says Peter Guldbrand, Vice President, Commercial, VR FleetCare.

The frame of the machine is based on a modified freight wagon, and the washing equipment is operated from a cabin equipped with cameras. The device is equipped with a water tank of 11 cubic metres filled with water from fire hydrants and a nozzle that can reach up to six metres, with pumps operated by a diesel generator. Furthermore, the wagon is equipped with front bristles suitable for washing the protective housings of the conductor rails.

Jaakko Laurila, Procurement Engineer at City Transport Ltd, is satisfied with the device:

"Unlike with the previous cleaning wagon, the user now has a well-illuminated closed cabin where they sit instead of standing. The new machine is also more reliable and cost-effective: the washing tip has a range of 360 degrees, the washings are more efficient, and the water tank needs to be filled less frequently. In addition, the detergent in the conductor rail housing is now applied by the machine, whereas it was previously done by manual spraying."