Train travel picked up during the second quarter, with train services added. The market situation of freight traffic continued to be positive. Even though the Group’s earnings were at a loss, the trend turned positive in the second quarter. 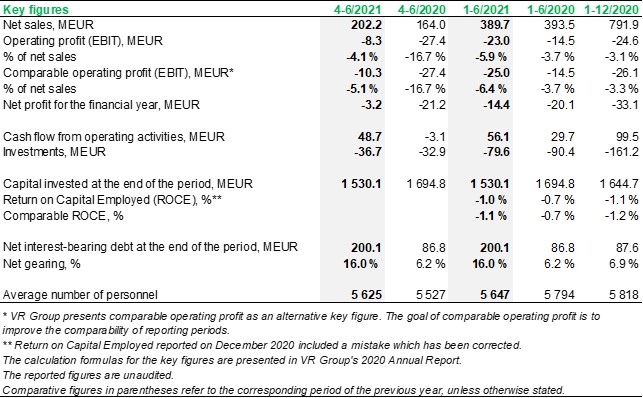 The COVID-19 epidemic continued to have a strong impact on the development of our business in the first half of the year. In particular, the epidemic affected VR Passenger Services, but also indirectly the Group as a whole. Our personnel, both in the field and in the office, deserve special praise for their work and service attitude in the midst of a protracted and challenging crisis.

Although a turn to a more positive took place and train travel picked up during the second quarter and particularly at the start of the summer, passenger volumes in the first half of the year were lagging behind the corresponding period last year, when the corona effect was only visible in the spring. During the reporting period, night train traffic and domestic travel were popular, while commuting suffered from the epidemic. Travel is likely to change in the future as teleworking and multi-site work become more common.

The containment of the epidemic was accompanied by restrictive measures throughout society, which meant that we limited the number of passengers to half of the capacity of the trains in the spring, and we also had to close down restaurant services for almost two months. We took care of safety in a number of ways and in March we brought the mask mandate into the trains. Due to travel restrictions, Russian traffic remained at a standstill. Demonstrations by train drivers also affected commuter and long-distance trains.

As demand recovered, we gradually re-established market-based train services, which we had had to reduce at the beginning of the year. We actively promoted domestic travel, for example, by increasing night train services, with attractive pricing and new services, such as delivering restaurant car products to the cabin. We launched a new ticket type for the summer, a holiday ticket that can be used for unlimited travel within a certain period of time.

We believe in the future of climate-friendly rail transport, as shown, for example, by investments in better wireless network connections for long-distance trains, and with progress in the procurement of new commuter and night train rolling stock.

We reached a significant milestone after Midsummer, when commuter traffic started pursuant to the new contract period between VR and HSL. Many changes and reforms have been made in VR’s commuter traffic as well as the maintenance operator VR FleetCare with an eye to the new contract period. We also prepared for the start of operation of the Tampere Tramway.

The market situation for logistics was positive, as the world economy was on a growth path and the economic development in Finland was also favourable. In Finland, especially in the forest and metal industry, the demand for transport was strong, while in Eastern traffic volumes weakened.

During the reporting period, we announced that VR Transpoint will be responsible for the roundwood logistics of Metsä Group's new bioproduct mill in Kemi, Finland, and at the same time invest in new roundwood wagons. Furthermore, we announced a significant collaboration agreement concerning the transports of Terrafame’s new battery chemicals plant. The close collaboration with the steel company SSAB will continue, and an agreement on rail transport and halving the related emissions by 2024 was signed during the reporting period. During the first half of the year, a record-breaking 7,000-tonne freight train and the first trains equipped with modular Finnowagons were also introduced in regular traffic.

VR FleetCare achieved the significant success of a growth strategy and signed an agreement with Vy, a Norwegian train operator, for the modernisation of night train cars. VR FleetCare also reorganised its production in a service-oriented way by centralising the lifecycle services of the components in its own business unit. As an example of investments in digitalisation and new technology, VR FleetCare introduced a “train scanner” to the Helsinki depot, which can be used to automatically detect defects in trains.

We took further steps in environmental work. We signed a EUR 200 million revolving credit facility (RCF), where its margin depends on the achievement of our environmental goals. In addition, we commissioned a large solar power plant at the Helsinki train maintenance depot. In turn, the machine intelligence assisted DAS system will help to optimise the driving of passenger and freight trains to increase energy efficiency in the future.

Outlook for the current year

The development of the coronavirus epidemic continues to dominate the outlook for the current year, particularly with regard to VR Passenger Services. In the summer, train travelling recovered and train services were increased, as leisure travel in Finland increased, vaccination coverage widened and restrictive measures eased. Although there has been a more positive turn-around in passenger service, the epidemic situation still remains uncertain. The epidemic has affected commuting in particular.

The global economy is in good shape, which improves the export prospects of Finland's basic industries. Domestic transport demand is expected to remain at an excellent level, supported in particular by the good cyclical situation in the forest and metal industry and strong demand for raw materials in general. In the forest industry, for example, the demand for pulp and roundwood is strong, but the reduction in paper production and the closure of production plants will also affect VR Transpoint's transports. Eastern traffic is expected to pick up during the rest of the year, considering the signed customer contracts and outlook.

VR FleetCare's external net sales are expected to grow from the previous year, as the company has actively sought growth and won several contracts through competitive tendering, the implementation of which will start or expand during the current year.

At the group level, VR Group expects the full-year net sales to grow and the result to improve compared to the previous year. In the long term, megatrends such as urbanisation and the emphasis on climate issues will support the popularity of rail traffic. At the societal level, the attitude towards rail and public transport is positive. Both passenger and freight traffic customers increasingly aim to increase their use of rail traffic. VR Group also seeks to increase the share of environmentally friendly rail and urban traffic through its own actions and by meeting the expectations of its customers.