What kind of idea has potential to be a hit? 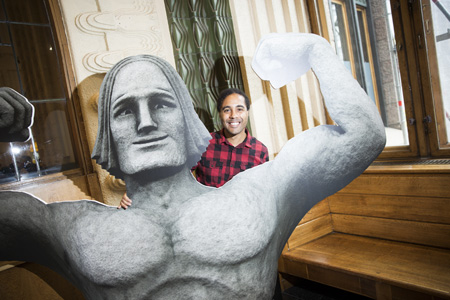 Idea gathering software, easy to use and engaging, and where every employee is able to participate in developing company practices in a democratic way regardless of organizational level or geographical location – 24/7.

Is that too good to be true? VR Group turned dreams to reality over two years ago.

The idea and innovation platform of VR Group is called ”Ideat kehiin!” or in English using my own free translation “Just throw in the ideas!”. There were approximately 2000 ideas given via idea platform last year.

Inspiration for the Hit Idea from Shopping Bags

Immediately when Joseph got the idea he published it in VR Group Idea Platform. His idea led to the biggest offer campaign of VR - Finnish Railways’  history in August 2014. The campaign was called The Stone Men Campaign and gave joy and benefit to all our customers.

It felt so good to see Joseph taking the first price in the best idea category in Idea Awarding Gala 2013. At the same time the implementation of the Stone Men Campaign was announced.

Investing in Innovations is profitable

There is a connection between innovations and competitiveness which is discovered in several researches.  E.g. according to Arthur D. Little Research (2013) companies which have a systematic way to collect and manage innovations, get on average of 13 % points more profit from new products and services. They also show 19 % difference in share of turnover from new products and services.

As it is pointed out in the ”Just throw in the ideas!” slogan: A tiny thought may lead to great improvements.